You’re preparing to move to a new home and everything’s going well so far. You’ve found the right moving company and you know how you’re going to organize your boxes so that the move goes smoothly. There’s just one problem. You have a gun and a variety of related accessories. In addition, you don’t know if you can move that gun across the country with you.

Thankfully, the Bureau of Alcohol, Tobacco, Firearms, and Explosives (ATF) says you can.

However, there are some things you need to consider before you bring your gun across state lines. With these steps, you can move your gun safely and legally.

Whether you already have a moving company or you’re searching for one, you need to find out if your movers restrict certain items. Many companies do move a gun for safety and insurance reasons. The odds are high that your gun will be on that list.

Along with guns, flammable items, batteries, and bleaches tend to be restricted items when moving. Ask your movers for their restricted items list. If they transport guns, ask about the steps you need to follow for them to move your firearms safely. 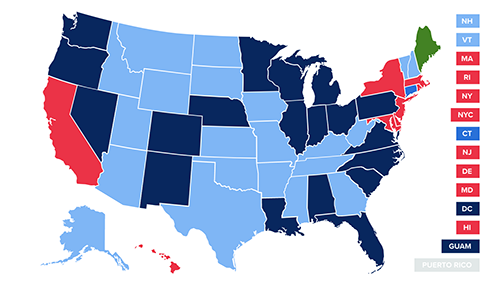 Though the ATF states that you have general permission to move a gun across state lines, every state has its own laws. This is because the federal guidelines are open to interpretation. Some states implement their gun laws differently from others.

For example, many states allow you to carry a concealed firearm without a permit. Others require you to have a permit that you can show if needed or may have strict laws about gun ownership in the first place. The National Rifle Association Institute for Legislative Action (NRA-ILA) maintains an at-a-glance map highlighting the gun laws of different states so you can prepare for any barriers you may face when moving your guns.

Step No. 3 – Pack Your Gun Carefully

As a responsible gun owner, you already know that letting your firearm bounce around loosely inside a box or vehicle can be dangerous. Even if the gun isn’t loaded, leaving it loose could cause damage that you may not realize is there until you try to fire it.

To avoid those problems when you move a gun, pack your gun in an appropriate case. Ensure the firearm is unloaded and that all safety mechanisms are turned on before packing. If you’re able, break the gun down into separate pieces to ensure there’s no chance of it going off during transit. Ideally, the case you use will have a strong lock to ensure nobody but you can open it.

Step No. 4 – Document Your Gun

As you’re packing your gun into its case, document every piece of it. Take photos and record the serial number, make, and model. You’ll need this documentation if the gun gets damaged by a third party during transit or if it goes missing. The police may be able to use the serial number to identify your gun if it’s stolen and they happen to take possession of it at a later date.

The Firearm Owners Protection Act allows you to transport your guns across the country. However, it also contains several provisions for doing so, with one of the most important being that you must store your ammo separately from your gun.

Purchase a lockable container for your ammo. You should also keep both this container and the one holding your gun away from the front of the vehicle transporting the firearm. This ensures neither is easily accessible to anybody who breaks into the vehicle. Failing to follow these rules can result in violation of standard federal and state laws for carrying loaded weapons. This can complicate your journey, especially if you’re traveling through states that have strict gun laws.

If you don’t already have insurance to cover your gun, now is the time to consider it. That’s especially the case if you’re using a third-party moving company because its standard liability insurance may not cover the firearm’s full value.

If you decide to take out insurance, ensure it covers the gun’s aftermarket value. In other words, don’t insure the gun for an amount less than you’d be able to sell it for secondhand.

Step No. 7 – Special Considerations for RVs and Campers

Perhaps you’re thinking about driving to your new home in a recreational vehicle (RV). While that’s sure to make for a fun road trip, you have a major issue to consider if you’re also going to transport your gun in your RV.

An RV contains a living space that isn’t separated from the front driving compartment. As such, you have an access issue to think about. Even if you’ve locked your gun into a case, you can’t simply place it in a draw inside the RV. If anybody can open that drawer, that means all state firearm carrying laws apply to your gun. As noted earlier, this can create problems.

If you’re transporting a gun inside an RV, make sure the gun and its case are placed inside a locked compartment. As long as you have that locked barrier to entry, the gun is considered inaccessible.

If you’ve followed the previous steps, your gun is ready for transportation. If you’ve hired a shipping company to move the gun, you don’t have to worry about the journey. But if you’re transporting the gun yourself, there’s a simple piece of advice to follow:

A lot of people let worry creep into their driving when they’re transporting guns. But if you’re employing these rules you’re doing so legally so drive as you normally would. If you do get pulled over or checked, immediately tell the authorities that you’re transporting a gun. Tell them where it is and ensure they know you’ve taken the proper steps to secure the firearm.

Bring Your Gun With You

Though transporting a gun across the country can present some complications, especially if you drive through a state with strict gun laws, you are legally protected during the journey. By storing the gun properly and keeping ammunition separate, you should be able to move it without any issues. Just follow these steps and be sure to communicate with any movers you use so they know that they’re transporting a gun on your behalf.

Article was written for The Well Armed Woman by Three Movers

Stand Your Ground Laws submitted by, Samantha Callander (consumer safety writer).Being a victim of a violent crime is not something anyone wants to experience. However, there is often a lot of confusion over what rights...

END_OF_DOCUMENT_TOKEN_TO_BE_REPLACED

History of Gun Regulation in the United States

This article showcases a great infographic depicting the history of gun rights in the United States since the ratification of The Second Amendment in the late 1700s. Check it out!

END_OF_DOCUMENT_TOKEN_TO_BE_REPLACED

Trying to understand state gun laws and compliance can be quite a hurdle. Not only do you have to be able to understand the legal jargon you have to be able to find the information! If you know where to look and have the resources you need, knowing the gun laws will be so much easier. Here are resources for some states that have more complicated gun laws that are likely to change.

END_OF_DOCUMENT_TOKEN_TO_BE_REPLACED

Where To Go Buy Your Gun

There are a number of options on where to purchase your firearm. The Well Armed Woman does not currently sell firearms or ammunition. In our products section, you will find wonderful options for everything you will need, but your gun.

END_OF_DOCUMENT_TOKEN_TO_BE_REPLACED

As I am not a lawyer or capable of keeping current on the laws in all states, I will use links to the Bureau of ATF (Alcoholic, Tobacco and Firearms), the NRA and other sites that are very reliable and current. It is your responsibility to utilize these links and the information they provide to fully understand the leg..

END_OF_DOCUMENT_TOKEN_TO_BE_REPLACED

Guns & The Law – Using Your Gun For Defense

END_OF_DOCUMENT_TOKEN_TO_BE_REPLACED

Tips For Traveling With Your Firearm by Land and Air

Republished with permission from our friends at Concealed Nation To most avid concealed carriers, traveling with your firearm can be an annoying and troublesome task when crossing State lines. Most career carriers have the necessary permits to travel to and through most States without worry. However, for th..

END_OF_DOCUMENT_TOKEN_TO_BE_REPLACED

Under federal law, new firearms may only be sold by businesses which possess a Federal Firearms License (FFL), and are known as FFL Dealers. There are multiple legal ways to purchase a gun. Gun Store Although FFL dealers are licensed by the federal government, they are also subject to many local laws and regulati..

END_OF_DOCUMENT_TOKEN_TO_BE_REPLACED

The Best Defense – After A Shooting

This video is an excerpt from Outdoor Channel's 'Best Defense'. It contains excellent role-plays and guidance on the wrong and right way to shoot an attacker  in self-defense